We share our research findings and investment insights on high-growth companies,

Is The Bear Market Nearing Its End? Here’s My Take. 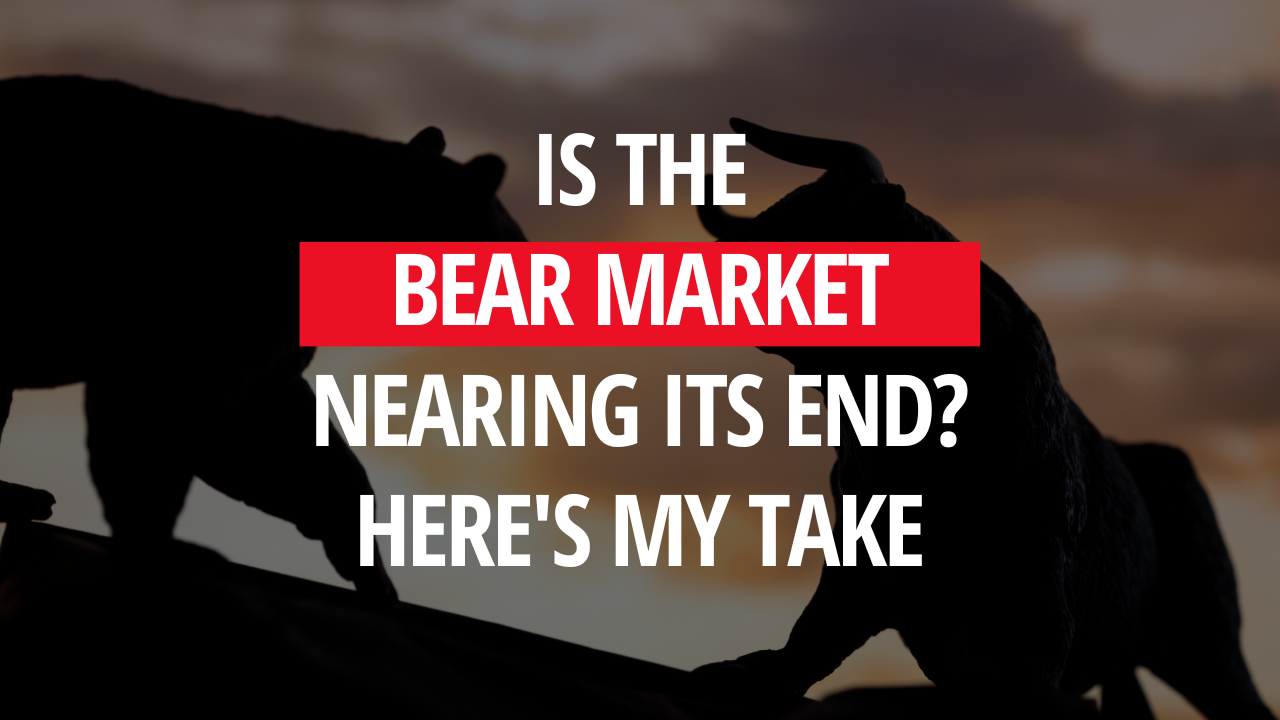 If you’re new to my blog, please read this article as an introduction to this post!

I will start off by sharing some of my recent thoughts.

Some investors rather not talk about macroeconomics because they either do not understand it or they want to avoid looking ignorant should their views turn out to be wrong.

When everything is screaming for a recession, they will say a recession is coming.

When they are mirroring what everyone else is saying, they are nothing but echoes.

A few days ago, I thought to myself, ‘Am I running the risk of being wrong in my macro analysis and losing “favour” among my readers?’

But I still prefer to do it. I believe that’s what you as a reader want as well – someone who provides a different perspective and is not afraid to share his thinking freely.

This is a recap of what I had covered previously:

There is a Wall Street proverb that goes like this, “Bull markets climb a wall of worry, bear markets slide down a slope of hope.”

Looking at the past decades, we faced several problems from the likes of covid-19, recession, trade wars, the euro debt crisis, and the foreign currency crisis. Every day, we’re bombarded with daily drips of negative news. Just tune in to CNBC or read The Wall Street Journal. There will always be a group of skeptics informing the public of the many reasons why the stock market won’t go up.  Despite that, we have enjoyed a historical strong stock market.

When things start to turn around and everyone is incredibly optimistic, this is where bull markets end and bear markets begin.

We have to understand that the stock market is not driven purely by logic. Otherwise, mathematicians would be the wealthiest people in the world. Psychology also plays a part, which is why some investors see value in developing their behavioural advantage in the stock market.

Nick Maggiulli, the author of “Just Keep Buying”, did a Twitter poll to seek some views:

The conclusion was clear. The majority of people expected the stock market to take more than 1 year to recover. In reality, less than five months after the stock market bottomed on 23 March 2020, it hit a new all-time high.

I’m not saying we will recover in 5 months’ time. The key takeaway is that investors hate losses much more than they love gains. People spend more time thinking about market crashes than how the market can recover.

That’s why many of us are very pessimistic now. This is the psychology of the stock market today. In my opinion, any positive news could spark a recovery.

Before moving on to inflation, I want to stress how important is it for us to understand that the stock market is forward-looking.

In 2008/2009, we experienced the global financial crisis. The S&P 500 index bottomed in March 2009 before recovering. As for the economy, the crisis raged on for a few more months before the situation improved by June 2009.

Similarly, take a look at this chart from the 1970s:

Back then, the USA economy was suffering from inflation. The market bottomed when inflation peaked, and then it continued to rise with decreasing inflation.

The market did not wait for inflation to be entirely over. A sign of improving condition was enough to start a rally.

In our current situation, once components of inflation start to come down, the stock market should start to rally.

My Views on Inflation, Energy Crisis in EU, and Recession

In the USA, June’s inflation rose by 9.1%. But we all know inflation is a lagging indicator.

Let’s look at some current information:

Current prices will take some time to work their way through the economy before it gets reflected in the inflation data. With prices coming down, this will ease the rate of global inflation in the second half of the year. If this persists, we should see the stock market rebound.

James Bullard, a member of the Federal Reserve, mentioned: “Once at 3.5% [fed rate], we could see where we are on inflation, then could make ‘tweaks’ including possible rate cut.”

Once inflation is stabilised, a rate cut is very favourable for the stock market.

In short, the interest rate hikes done by the Federal Reserve are working.

For context, the political leaders in European Union made the decision to ban Russian oil imports to punish Russia for invading Ukraine. This caused an energy crisis.

You may be asking, “How about the energy prices in European countries like Germany? Wouldn’t that persist and drive up inflation?”

My answer is no.

I agree that Russia needs to be punished for invading Ukraine. However, the politicians in European Union mishandled their situation. They put their own political interests ahead of their people. Despite knowing that they have a huge reliance on Russian oil imports, they went ahead to self-impose a ban, leading to an energy crisis.

We can tell that Germany is already in great trouble. At the request of Germany, Canada shipped back a repaired turbine needed in a gas pipeline that will allow Russia to resume exporting oil to Germany. This means Germany is breaking off from the united front in support of Ukraine.

Furthermore, the oil sanction is ineffective. It caused the price of oil to increase. While Germany and France are facing higher energy prices, Russia is actually making more money now by selling oil to its allies such as China and India. Other sanctions such as export controls, freezing bank assets and visa bans are more effective.

I don’t know how this issue will be resolved but the pain is too great to ignore for any citizens. Politicians are under heavy public pressure. Restarting coal or nuclear plants won’t be an overnight affair. Some members of the European Union might need to make some concessions by accepting Russian oil once again.

A recession is defined as two consecutive quarters of negative economic growth.

USA’s GDP decreased by 1.5% in the first quarter of 2022. There is a strong possibility of a recession. If we enter a recession, I expect it to be a mild one.

In June 2022, USA employers added a total of 372,000 jobs. The USA’s unemployment rate held steady at 3.6%. According to Jeff Cox, there are 1.9 job openings per every available worker. Referencing Mastercard’s June data, consumer spending remains robust too. Unless our unemployment rate rises above 5% and I see a continued rise in Initial Jobless Claims, I do not think we will sink into a deep recession.

Some investors believe that the stock market could continue dipping in the months to come.

My assessment is simple. We took in a lot of bad news already. What’s known to us is a possibility of a recession, a 75-100 bps hike in July, and poor earnings by some companies. I might regret my words very quickly but I genuinely believe we need a lot more bad news to bring the stock market even lower.

To conclude, if things continue to stay on course, it will take a while for the psychology of the stock market to be more positive about our inflation situation. I think we are close to a market bottom and the next 2 months will either confirm or destroy my hypothesis.

As always, do your due diligence on companies and perform your valuation work before buying.

Never do lump sum investing, spread your purchases over time.

If you’re new to investing, do not overconcentrate in a single position.

With stocks down by 60%, it may also be scary for investors who have never seen such drawbacks before. Some companies may recover and some may never. If you’ve been wondering which companies you should invest in, I’ll be holding a LIMITED-TIME foundation class to share how you can identify the right stocks that can rebound from the bottom and the best way to take advantage of the current market situation. Click here to register now.

Want To Get Access To Valuable Super Stocks Tips?

We'll only send the good stuff to your inbox.

You're safe with me. I'll never spam you or sell your contact info.

Where Should We Send The Link to the Free Training?

BONUS: Register & Get Exclusive Access To Growth Investing Tips Delivered Straight To You For FREE!